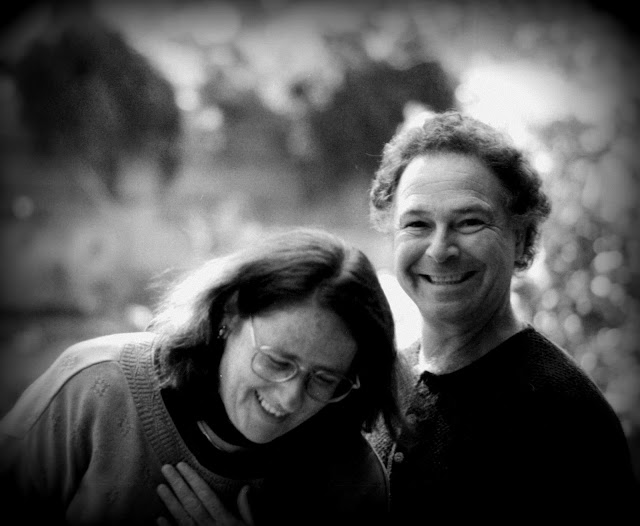 This happy picture was taken at a Yuki Teikei Haiku
Retreat at Asilomar in the early 1990s.    jhhphoto


how to grow old
winter moon

a fish jumps
from it, into it...
evening stillness

A Path in the Garden, Christopher Herold,
Katsura Press, 2000, unpaginated. 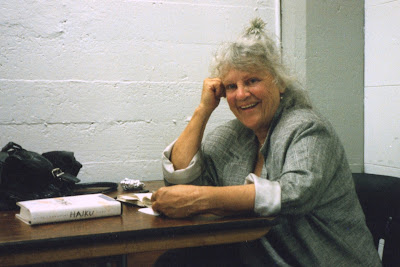 Here she is at the Yuki Teikei Haiku Retreat at Asilomar
featuring Robert Hass (blue shirt)
many years ago. You can see how full of life and joy she is. 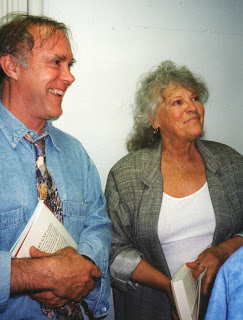 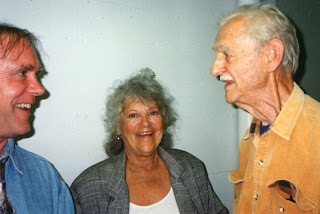 I am away from my archive and will need help identifying the man in the orange shirt
(is this her Bob?) and the year that Retreat was held.

The Belle of Haiku

Here is the message from Carolyn Hall to let us know
of the passing of that wonderful bright haiku spirit and sprite,
Laurabell Hawbecker. Good night, dear friend. . . jhh

I just received this notice from Judyth Greenburgh, a friend of Laura Bell:

"Our dear friend Laura Bell peacefully passed away November 30, 2016 at home with her teddy bear and rabbit in her arms and her faithful friend Ruth by her side. She had wanted to be home where she didn’t have to wear any stupid hospital gowns and could go the same way she came into this world.

She will be missed by her family and all her friends. She can now freely tap dance on her houseboat with Bob playing the jug."

I am particularly sad to hear of her passing. Not only was Laurabell the spriteliest person I ever met, but she was my haiku mentor. Back in 1999 and the early 2000's she taught me all she knew about haiku, and introduced me to the Haiku Poets of Northern California . . . for which I am eternally grateful. She was an active, and adored, member of HPNC until approximately 2003 when she and Bob moved from their Sausalito houseboat to the desert in Inyokern CA (which was better suited to Bob's health). We've missed her ever since.

Laurabell was a senryu master, always able to make us laugh! But she wrote heartfelt haiku as well.

Here are a few of her poems from Mariposa:


greeting my sick friend
the apology
in her eyes


sun-baked desert
the breeze I waited for
hotter still


fall sale
women’s skirts half off
at the mall


spring flood
the scrubbed face
of a river rock


darkening mountain
red in the warmth
of the setting sun


Last, but not least, here is a link to a film Judyth made
of Laurabell. We are so fortunate to have this! 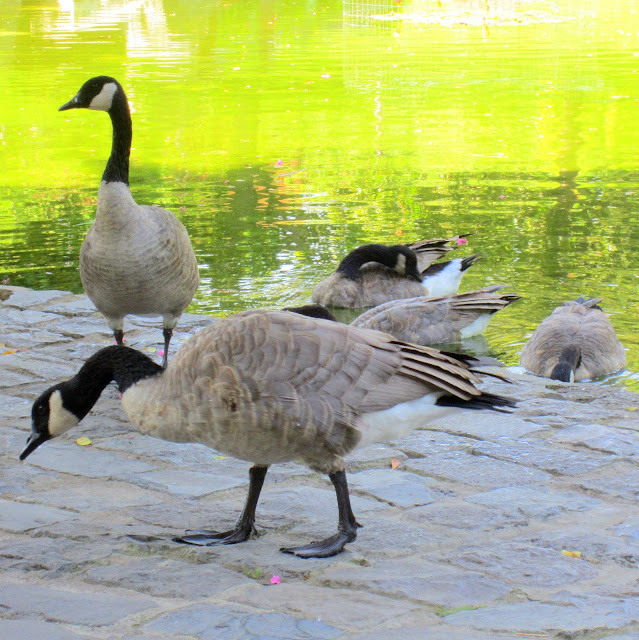 So many times I have visited the
Japanese Friendship Garden
in San Jose with haiku friends.
This was taken on the most recent outing on a flying visit home.

Since this garden was established after World War II,
as a symbol of friendly relations with Japan
and the Japanese people.
I thought it would be a good image for today. jhh

over time
my own footprints
make a path

This is a link to a
wonderful and inexpensive haiku periodical
which is well worth subscribing to!
Or inquire: John Stevenson
P.O. Box 122, Nassau, NY, 12123.

Haiku Gathering a quarter century ago! 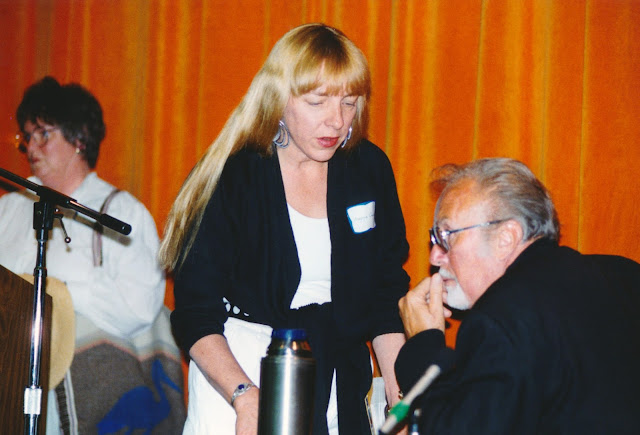 I must have forgotten to have them say "cheese!"
Left to right: Patricia J. Machmiller,
Margaret Chula, James Hackett!

All of these people have written books that are worth looking up!

This is a candid moment from the haiku past.
I took it at Haiku North America 1993.

on the patio
the afternoon drifts along
with the butterfly

An abandoned book . . .
skimming through its pages,
breezes from the sea.

NOTE: Thanks to Michael Dylan Welch for the corrected date of 1993, which was the
HNA that Mr. Hackett attended.  jhh 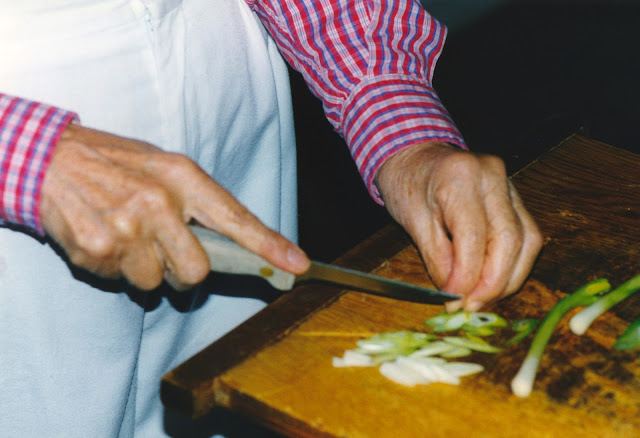 There is a proper way to do everything, and it is important to do everything properly!
These are the hands of Kiyoko Tokutomi slicing green onions
that will be part of the meal she is preparing for us at the Machmiller beach house
when Mr. Masahisa Fukuda, the scholar and renku expert (His haiku name was Shinku!)
visited during the Yuki Teikei Haiku Retreat at Asilomar. It was in 1998, I think.
Kiyoko also knew there was a proper way to write haiku; she continued to write
haiku in Japanese, although she lived in America for most of her adult life.
The haiku in the book below were originally written in Japanese and published in
a haiku journal there. They were translated by Patricia Machmiller and Fay Aoyagi;
the book was published shortly before she died, and she was able to read from it
at the Yuki Teikei holiday party in late 2002.

Autumn in the air--
from morning on, pieces of cloud
tear off and scatter

Editor's Note: I have plans to keep
adding content to this blog.
Plans are just plans, but better
than nothing...
Posted by June at 9:41 PM No comments: 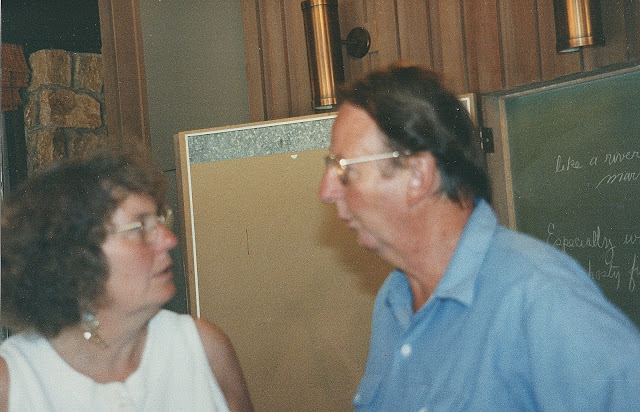 This is not a very sharp or well-composed picture that I took at a
Yuki Teikei Haiku Retreat at Asilomar in the early 1990s.
But it clearly shows the intensity and involvement with each other
of Jane and Werner Reichhold--when they were discussing
matters of art and aesthetics.
Since they were BOTH artists as well as writers,
they brought a great deal of background to their discussions.

At the Retreats, we never did get to know Werner that well, because he most often
preferred to walk on Asilomar Beach to attending every indoor session. . .
but we saw enough to know that he was a person serious about art!
And about literature!

We are all thankful to Jane for her service to the arts of haiku and tanka;
and we are deeply sad that she has gone from us.
Posted by June at 1:15 PM No comments: